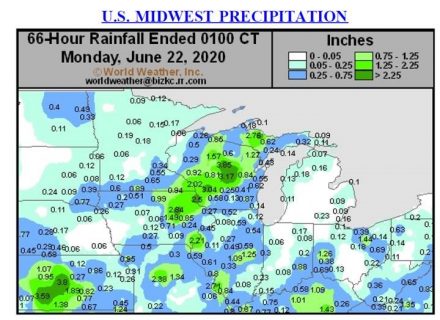 Disappointing Rains in Some Areas put Crops at Risk

Over the weekend some areas of the state got some good rain totals, but many other areas were missed by any precipitation. Ryan Martin, HAT chief meteorologist, says the chances of significant rain this week are not high, “We will see some scattered showers, but I do not see widespread coverage or large rain amounts.”

According to USDA, last week the amount of rainfall varied from none to 0.36 inches. The statewide average precipitation was 0.16 inches. The latest crop update indicated that top soil moisture statewide was 54% short to very short.

Martin says the weekend looks to have a better chance of significant precipitation, “We will have a warm front followed by a cold front, and that should produce rain totals of ¼ to ¾ of an inch.” Yet Indiana will not see some of the larger rain amounts other areas will get. “Illinois and Michigan will get the 1 inch to 3-inch totals,” he added.

Then the heat sets in, and it looks like very warm conditions for the rest of June and well into July. This rain is going to be critical. “If we don’t get rain in the next few days, we are going to see crop stress as we move into the critical pollination period of July and early August,” said Martin.

Martin stated that daytime highs could reach into the upper 90-degree range in the next few weeks.

Corn and soybean prices moved lower on Monday with the promise of rain this week. If that the rain is disappointing, that could be a market factor, says John Zanker, with Risk Management Commodities.

“The temperature forecast is far from mild, which is likely keeping futures supported.,” said Zanker. “There are going to be a bunch of 90-degree days between now and the 4th of July, which will keep the bears on edge. During three of the previous four growing seasons, we did see some of the hottest days of summer in late June, and all three of those produced record-to-near record yields. We’re still in position to see a new record established, but I do think enough damage has been done thus far to prevent a major surge in the national yield. At this point, the possibility for Illinois and Indiana to touch their previous records appears remote. And that’s not due to the recent stretch of dryness. It’s due to getting the crop planted in less-than-ideal conditions across a large amount of acreage. To the west, Iowa and Minnesota are in prime position for new records, while the Dakotas and Nebraska are fighting some dry weather blues in spots.”