Corn growers may well remember 2021 as a year of awesome opportunities and unforeseen risks. DEKALB Asgrow Technical Agronomist Jason Harmon characterizes the northern Indiana corn crop in that manner, starting with a decent seed bed at the start, followed by favorable weather in June and a phenomenal pollination season.

But June was wet and in August the rain events turned off, “and we were really dry and we watched one of our probably highest crop potential years ever slowly dwindle away just due to the fact that we didn’t have moisture to help finish mobilizing nutrients to those kernels that we had set back in July.”

Harvest started well, according to Harmon, and even though kernel fill was not as desired, there were still a lot of kernels and solid yield potential before wind events moved in. 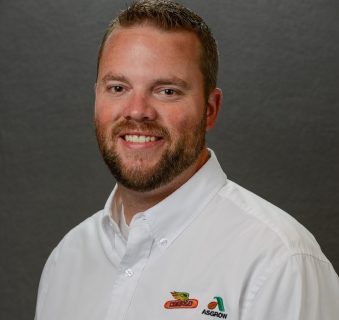 “You know these stalks definitely showed that they did everything they possibly could to finish these ears out and that led to some stalk quality issues late,” Harmon told HAT. “The stalk rot complex was strong and it really ropes back to what we saw in June with all the moisture. June moisture really led to fusarium and a lot of these other diseases to be able to take hold of this plant and they really don’t show themselves unless this plant runs into adversity. That adversity came in two things this year. The first one was drought and then the second was diseases, especially tar spot.”

Harmon believes this year has taught him a lesson about fungicide use next year.

“A tool that we have found that has great efficacy against diseases and that’s fungicides,” he explains. “But I’m going to put a little twist on it. I want to move it up sooner. I think we need to start utilizing our fungicides sooner and we need to start thinking about why we want to use to use it sooner. This year showed that we got infected in June because of how late, in May we didn’t have that extremely fast growth, so we were sitting out there in the environment. Our seed treatments only have so long to last because there’s only so much put on that real state of that seed, so are our plants were opened up to get infected, and they did. So let’s clean that plant out. Let’s do it on a V5 to V8 time frame because that’s a great time to get fusarium out of that plant so that in if we run into adversity late we will not have a lot of that disease pathogen in our plants to really cause a stalk rot complex.”

He says be prepared to go with a tassel application of fungicide sooner rather than later next year if we have another really wet June.

And how did DEKALB corn perform with all of 2021’s ups and downs?

“We have 39 plots in our system where we’re sitting at a 233-bushel average across these plots throughout the northern half of Indiana. There’s nothing pinpointed on the best dirt. It’s across many geographies and I’m excited to see how DEKALB consistency has played out for our growers this year.”