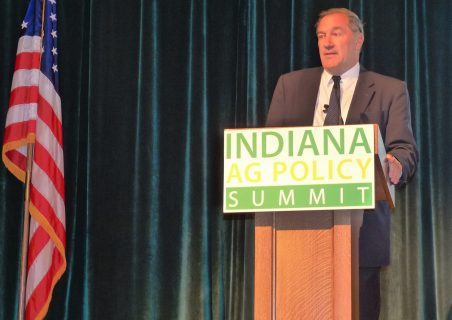 The Indiana Corn Growers Association and Indiana Soybean Alliance hosted Democrat Senator Joe Donnelly and Republican Senate Candidate Mike Braun to their Ag Policy Summit on Monday. Donnelly took the stage first and discussed the Farm Bill, the trade war with China, the Renewable Fuels Standard, and immigration to the crowd of farmers and agribusiness leaders.

When asked what his top priorities for farm policy were, Donnelly said, “It’s passing the farm bill so we have certainty. It is getting this tariff situation fixed because I think it’s so incredibly dangerous right now. It is making sure in the farm bill we have crop insurance because you never know what’s coming down one way or the other. And it’s the RFS.”

Donnelly went on to talk about a meeting he had with President Trump at the White House regarding the trade war with China. He says he expressed to the president that it’s putting Hoosier families in mortal danger. Donnelly says farmers should not be the ones feeling the brunt of this trade war.

“I worry that this may be the beginning of at least a couple years long process. And if it is, that’s as big a flashing red light and as big of a trouble sign as we could possibly have. And so, I am focused like this on a laser because it’s our future.”

And Donnelly reaffirmed his support of the Renewable Fuels Standard and hopes that with former EPA Administrator Scott Pruitt out of the way, the RFS will be strong.

“When we are putting money in your pockets instead of in the pockets of Middle Eastern sheiks, instead of other countries that don’t have good intentions for us, that’s a win, win, win, win.”

Tune in to your local Hoosier Ag Today station or check back here tomorrow for our story with Republican Mike Braun, Donnelly’s opponent in November’s election, from the Indiana Ag Policy Summit.