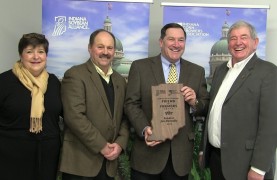 Just prior to the start of the annual Purdue Ag Alumni Fish Fry at the Indiana State Fairgrounds Saturday a special award was presented for the first time.

“It’s our great honor today to give our first Friend of Farmers award to Senator Joe Donnelly,” said Jane Ade Stevens, CEO of the Indiana Soybean Alliance and Indiana Corn Growers Association. Those organizations created the Friend of Farmers Award to recognize a local, state or federal public official who advocates for agriculture.

Kevin Wilson of Cass County, a past president of the soybean group, said it was an honor to present the first award to the “warrior” who has stuck up for farmers in recent years. Wilson cited the Waters of the U.S. specifically.

“When we have those type of issues pop up you’re supposed to be able to turn to your legislative allies and see if they can give you some help,” Wilson said. “And we turned to Senator Donnelly and he stepped right in. He stepped against his own party lines and he authored a bill to try to get that taken away for us. He was very successful and there is a lot of credit due to him because of all this.”

Ronnie Mohr welcomed the senator who has supported the Indiana corn growers who grow the corn that allows for over a billion gallons of ethanol to be produced each year.

“He has worked hard on the ethanol issues and that is very, very critical for rural economies all the way around, not just the ag, but jobs and everything else. I just can’t say enough about how he stands up. I got to know him a few years ago and think a lot of him. He is truly a friend of agriculture all across the United States.” 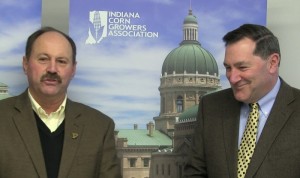 Wilson also told the story of the promise Donnelly made to him to keep crop insurance secure last year.

“He told us that he would go and lay down in front of President Obama’s car! He would go that far to make sure that those cuts do not take place.”

Donnelly interjected that had he indeed laid down “the President would keep going!”

The senator thanked the presenting farmers for the award and for providing him the wisdom he needs while serving on the Senate Ag Committee.