On Saturday, Indiana Senator Joe Donnelly was presented the

Friend of the Farmer award by Indiana corn and soybean growers.  After the presentation, the Senator discussed several important farm policy issues with Hoosier Ag Today. Senator Donnelly  was upbeat on most of the major farm issues pending before lawmakers. He feels the energy bill that is currently on the Senate floor will get passed and that it will be friendly to ethanol and the RFS, “I think we will get an energy bill passed that is good for the country. I feel very strongly that the RFS has a great future and we are going to continue to fight nonstop for it.”  He added there was enormous support for the RFS from senators from many states.

While the President vetoed the Senate-passed bill that would have forced the EPA to scrap its Waters of the U.S. rule, Donnelly says there remains strong opposition in the Senate to what the EPA is trying to do, “There is a real sense in Congress that things like farm ponds and ditches should not be part of this. I think we have a good group and strong support in Congress.” He feels the courts have sided with Congress and will eventually rule against the EPA. 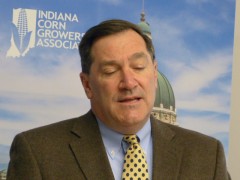 On the issue of trade, Donnelly is reviewing his position on the Trans Pacific Partnership. He said what will help chances of the trade deal getting approved is more benefits for the non-ag sectors of trade, “If we can provide an even playing field for those in manufacturing — if we can do that — it would be a great things for the deal.”

Donnelly also feels expanded trade with Cuba is needed. He said Indiana agriculture would benefit by allowing more trade between the US and Cuba. On Friday, Donnelly announced his support for bipartisan legislation that would lift the ban on private banks and companies offering financing for the export of agricultural commodities to Cuba. The Agricultural Export Expansion Act of 2015 would remove this obstacle and help agriculture exporters, including Indiana agriculture producers, sell their products in Cuba. Donnelly joined 13 Senators as a co-sponsor of the bill.  Donnelly said, “Hoosier farmers are known for their high quality products. That is why I am supporting this commonsense legislation which would remove a roadblock and help boost Indiana agricultural exports in foreign markets. As Cuba begins to make the important changes to become a more free and open society, I support policies that ensure Hoosier farmers have access to the Cuban market and that the Cuban people can have access to products grown and manufactured in Indiana.”