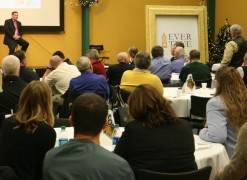 “If you want to promote your product that it’s non-GMO, God bless. This is America and you have the freedom to say anything you want and put it on your label.”

With that statement out of the way, Indiana Senator Joe Donnelly told farmers this week he just doesn’t want to see mandatory GMO labeling being handed down by every state across the U.S.

“I don’t know for sure but my guess is it will be something like a computer code that you can hit with your phone so mom in the grocery store can see and make a decision. I think that’s where this is going to come out at the end of the day. That’s just a guess, but we’re trying to get it done in the first month or two so we can be ahead of Vermont and other states. What this will do is set a preemptive federal law that prevents the states from having an ice cream company having 50 different labels on 50 different flavors and all of a sudden you’re looking at 3,000 different packages, which is undoable.”

The Hoosier Democrat said he is in favor of a preemptive federal law even though it has been a point of debate.

“I’m very supportive of preemption,” he explained. “We’re just trying to do common sense and we do preemption in many other areas in this country. It isn’t trying to take states rights away. It’s simply saying we are a nation of 50 states and on some things it’s more common sense to do these things. I don’t think preemption is the problem point. I think it is what will the packaging look like and that’s the last area.”

Donnelly said it’s likely that federal action on labeling will not ramp up until next year.

Next June or the beginning of July is what we’re looking at as a timeframe. I don’t think it’s going to happen this year, but at the beginning of next year we’ll probably come to some type of agreement then with the grocery manufacturers, the farmers and others.”