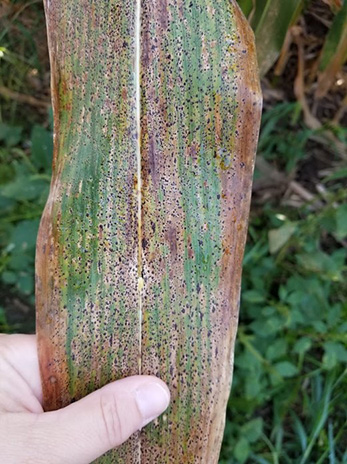 During a critical time for the Indiana corn crop, Purdue University says they’ve found a low incidence of various diseases. One agronomist out in the fields agrees with the Purdue assessment, and while that’s good news, farmers looking at just what is present now concerns her.

Technical agronomist Kirsten Thomas-Garriott with DEKALB-Asgrow says plant disease, like disease in animals and humans, is something you want to get a handle on before it gets bad.

“I’m not worried currently about the level of infection that we’re seeing, and we have some low incidence out there of northern corn leaf blight, gray leaf spot, things that we see most years,” she explained. “We’re also seeing tar spot popping up as well in fields with a history of it or maybe where there was irrigation and conditions have been favorable, and I am considerably worried about that. We’ll see how the weather forecast shakes out. We really haven’t had super favorable conditions, but we know that the inoculum is there, so if the weather changes on us there’s certainly a possibility for that risk.”

Fungicide application considerations include making the decision to apply, selecting the right product, and determining the best timing. Thomas-Garriott says they like the application between tasseling and early brown silk stages.

“I think when you get into later brown silk that’s just really too far to influence yield in a big way for most of the diseases that we see in central and northern Indiana,” she told HAT. “When we talk about southern rust that’s a little bit of a different animal, or tar spots, those are a little bit different, and we can consider second or later applied applications of fungicide just because those diseases can be so devastating. But in the average situation in northern Indiana, we really like that early timing just at or after tassel, early silk etc.”

Thomas-Garriott has recommendations to help determine if it is smart to go with fungicide in corn in our next report.

She rates the crop across the central third of the state as fair to good overall, but again this year there is a lot of variability to be seen.