Doud: Agriculture Should be First in Line to Get Issues Resolved 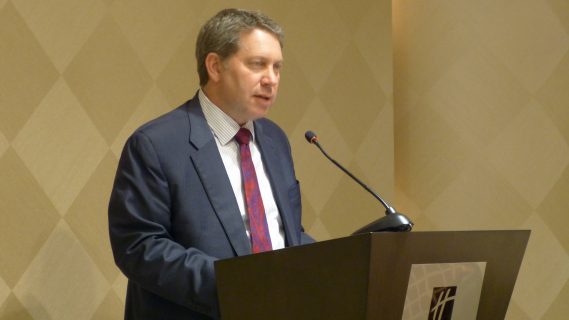 “I guess this old farm boy likens it to the goose that laid the golden egg, and now China wants the goose. For President Trump’s part, he’s looked at this and said, ‘You know what? It’s time to do something about it.’ He’s decided to step into the breach, and there’s no good time to do that. In particular, there’s no good time to do that for US agriculture.”
Doud says that he has conveyed to his boss, Ambassador Robert Lighthizer, “Sir, as you can see now agriculture is at the tip of the spear. We’re the ones taking the first bullets in this discussion. So, my simple request to him is that means agriculture should be at the front of the line to get our issues resolved first.”

Doud says the USTR is focused on opening markets. He touted successes with sending poultry to South Korea, beef to Brazil, and pork to Argentina. And he’s working very closely with someone Hoosier farmers know.

“I’m on the phone with the new Under Secretary for Trade Ted McKinney every single day. We’re talking about ways that we can move balls forward. Hopefully balls are not on the ground that we’ve got to pick up. We try to keep things moving around. We’ve got a lot of things to work on obviously.”

Doud said there is great interest in a bilateral agreement with Japan. He added that NAFTA negotiations are going pretty well but wants to wrap up those negotiations to send a strong signal to the marketplace. Doud believes that another important opportunity will be with the United Kingdom, contingent upon their exit from the European Union.