Full speed ahead for Enlist corn 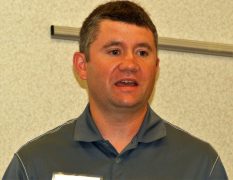 Dow AgroScience’s Enlist corn has been cleared for takeoff, and Thursday company officials said farmer requests are already coming in. Sales in the U.S and Canada are set for later this year for the 2018 growing season after China approved corn imports with the Enlist trait. John Chase with Dow says it has been a great week since the announcement.

“This means for the 2018 season we have a fully enabled system,” he told HAT. “We have the herbicide and now we have the trait approved for import into China, so we are going to be commercial next year. Our brands will be selling corn with the Enlist trait beginning later this summer, so in our Mycogen brand, Brodbeck, Dairyland, Pfister, Prairie Brand, they’re going to have this trait available as part of the offering.”

Chase is the U.S. commercial lead for Enlist.

SmartStax® Enlist and PowerCore® Enlist hybrids used with Enlist Duo® companion herbicide give growers a leg up on hard to control weeds and weeds resistant to glyphosate. Enlist Duo is Dow’s “proprietary blend of glyphosate and our new 2,4-D choline. This product is designed to land and stay on target with near zero volatility, reduced drift, low odor, and it is getting just incredible marks for the efficacy on weeds. It’s taking weeds out this year and growers are very happy with that.”

Chase explains their Colex-D® technology gives farmers and neighbors confidence when the sprayer goes to the field.

“That is the science that goes into this formulation, so it’s not just two active ingredients put together. It’s two active ingredients with this formulation technology that offers reduced volatility of 96 percent compared to a traditional mix of glyphosate and 2,4-D, 90 percent reduction of drift when using the right nozzles. Half of that drift reduction comes from the nozzle, but half comes from the formulation itself.”

With the proper nozzles and boom height Enlist Duo will stay on-target.

Enlist technology will also be licensed to other seed companies. Dow AgroSciences is also ready for full commercialization of Enlist soybeans and Enlist E3™ soybeans. That will have to wait for final import approval from both the EU and China.