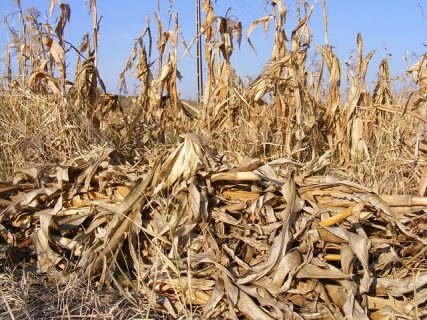 The second half of harvest is going a lot slower than the first half due, in part, to a large amount of downed corn. A combination of weak stalks and high winds has resulted in a good deal of lodged corn this fall. Cold, wet weather is also playing a role in the slowdown of harvest. Northeastern Indiana Pioneer agronomist Lance Shepard stated, “Harvest in NE Indiana has definitely been slow. You just get ramped up, and then the rains come.” He told HAT a lot of activity took place over the weekend, but rain and snow are in the forecast for this week.

The slow pace of the second half of harvest has allowed many producers to try to harvest some of the downed corn. “Slowing down the pace of harvest has definitely helped bring more bushels into the combine,” said Shepard. “But there is still some harvest loss due to the lodged corn.”

Yet, even with these late season yield losses, Shepard said good yields have kept most growers happy.

“Even with the losses, yields are higher than normal; so that has helped make folks feel a little better.”

There were no updated harvest progress reports from USDA on Monday due to the federal holiday.