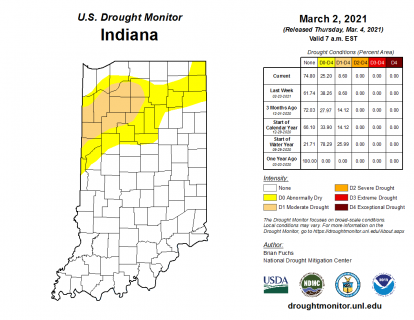 As farmers are ramping up toward planting season, drought conditions continue in many of the top corn-growing states. Last week, the U.S. drought monitor showed 11 percent of Midwest acres are in moderate drought. Over half of the High Plains are in a severe drought, and 19 percent of the region is experiencing extreme drought conditions.

For example, Iowa, the number one corn-producing state, faces extreme drought conditions in the northwest part of the state. Roughly 10 percent of Iowa is in a severe drought.

Soil moisture is more favorable in Illinois, but the central part of that state is abnormally dry. A small part of the east-central region is in moderate drought.

Nearly all of Nebraska faces some moisture stress at this point, with the southwest corner of the state in extreme drought. The entire state of Minnesota is abnormally dry, with about 40 percent of the state, especially in the northern third, in moderate drought.

Only nine percent of the acres in Indiana are in moderate drought, primarily in the northwest part of the state. More than half of Kansas is abnormally dry, while drought conditions are severe in half of South Dakota.

Ohio and Missouri have much less drought to deal with than other states. About 61 percent of Wisconsin is abnormally dry, with almost half of Michigan in the same category.