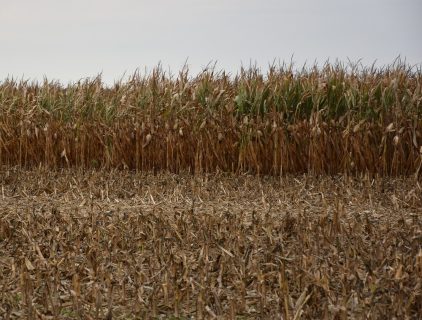 August held a lot of promise for the corn and soybean crops in the eastern Corn Belt, but dry weather tempered yield expectations. As we get closer to harvest, Rod King of Dairyland Seed, says stalk integrity issues in corn is something growers need to watch as harvest starts.

Then there is some cannibalization—the stalk is taking nutrients and water out of the leaves and trying to finish the kernels. King says there’s two things growers need to be aware of as the finish line gets closer.

“Growers need to be very careful and target their fields for an aggressive harvest strategy—be out there in the fields, look at stalk integrity and identifying hybrids or fields where that stalk is losing integrity and likely to fall down,” he said.

The other thing is premature ear fall.

“The concern there is the shank integrity or the point of attachment of the shank to the butt of the ear,” said King. “Is that going to get weak, slip the husk and fall?”

King says the biggest take home is that producers will need to be aggressive in harvest management. For more information, contact your local Dairyland Seed agronomist.