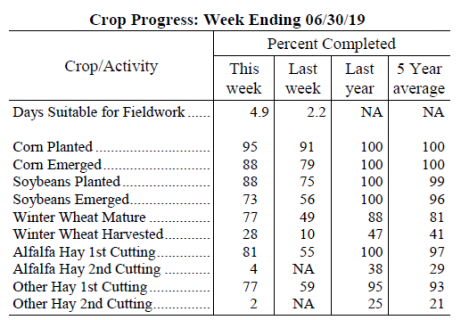 The average temperature for the week was 76.5 degrees Fahrenheit, 3.4 degrees above normal for the State. The amount of rainfall varied from 0.02 inches to 2.20 inches over the week. The statewide average precipitation was 0.98 inches. There were 4.9 days suitable for fieldwork for the week ending June 30.

Corn planting was all but wrapped up for the season, and growers were able to make significant progress with soybean planting. Winter wheat conditions remained relatively unchanged, and harvest progressed steadily but remains well behind the previous year and five-year average. Farmers were able to make progress with hay cuttings, though it remained behind schedule. Other activities for the week included sidedressing corn, spraying for weeds, and replanting where necessary.