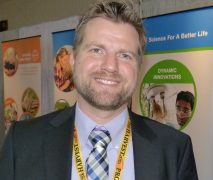 Discussing the importance of residual control in herbicides is common. One expert believes fungicide conversations will increasingly focus on residual control as well. Thorsten Schwindt is Senior Product Manager with Bayer CropScience. He says Indiana growers will be interested in their new Delaro® fungicide to help with northern corn leaf blight, gray leaf spot and rust which was abundant last year.

“I believe there’s going to be a new group of premium fungicides, and Delaro is going to be one of them, which really adds when it comes to residual. What’s unique about Delaro is it’s not only about the length of control. It’s really about what provides the control. With Delaro both modes of action provide residual activity on a broad spectrum of diseases, not just one or two, but really a broad spectrum. That makes a difference and comes in very handy for growers who want to be protected all around. You don’t want to bank just on the one disease to show up, you want to be protected all around.”

Schwindt says corn growers tend to wait longer periods of time to make a fungicide spray decision, but he sees a shift in thinking from soybean growers.

The new Delaro fungicide has two modes of action providing about 21-28 days of residual control. He says the application window is very flexible, but the best time is at tassel.

“To me it’s like a perfect tassel product,” Schwindt told HAT. “That’s because of the residual activity, because of the breadth of spectrum disease, and that’s where with the trials coming in we see the biggest lift also, not just compared to untreated but also compared to current standards like Stratego yield or its competitive brand in the market.”