Purdue and DuPont team up 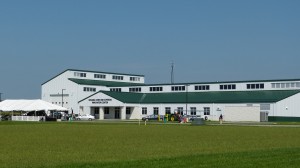 In a public-private venture, Purdue agriculture is getting a boost for its automated phenotyping center, the Indiana Corn and Soybean Innovation Center which opened just last year. DuPont and Purdue University have announced that Purdue now has access to DuPont Pioneer’s proprietary phenotyping and ear photometry technology. Karen Plaut from Purdue says the research collaboration has many benefits, including the ability to study ears of corn in ways they never have. 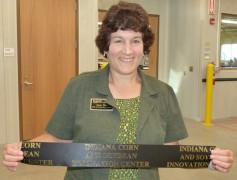 “That’s important because that really is where the profitability lies, and how do you maximize the yield of corn that you can get,” she said. “So, by studying for example where there are missed spaces in an ear of corn, where the ear of corn hasn’t grown the way it needs to, really goes to a difference between how much money a farmer can make and what that profitability is. It’s also important environmentally because the more you can do with a single ear which is where all the resources are the better off you can treat the environment, because you need less chemicals and other things.”

It’s great for farmers, but it’s also an important advancement for students.

“These are the new technologies that are moving forward that help students move forward in looking at how we are investigating how to improve crop productivity. So it uses advanced algorithms to figure out what it means for a single corn, and you can take that and apply it to the whole fields.”

Plaut is senior associate dean for research and faculty affairs and director of agricultural research at Purdue.Karen Plaut on DuPont Pioneer technology 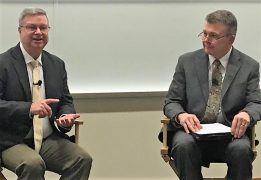 “So, it’s a rather unique arrangement for us because it’s a platform that we’re still utilizing and still trying to improve, and we’re offering Purdue the opportunity to put that as part of their research program so that they have the most cutting edge tools as well,” he said. “Also, their undergraduate and graduate students will be able to utilize the very latest cutting edge technology in this space.” (hear more:Jerry Flint on DuPont Pioneer technology)

To further enable the advancement of students pursuing agriculture-related majors and support plant sciences research, DuPont also will sponsor the Henry Wallace Chair in Plant Sciences in the Purdue University College of Agriculture.

“We could not be more excited to have DuPont as a collaborator in our plant sciences program,” said Jay Akridge, Glenn W. Sample Dean of Agriculture. “This investment will dramatically enhance our capabilities to improve plants and build on the momentum of the Purdue Moves investment in Plant Sciences.”

The newly endowed chair recognizes Henry A. Wallace, who in 1926 founded the Pioneer Hi-Bred Corn Company, now DuPont Pioneer. An advocate for farmers and the American people, Wallace also served as the U.S. Secretary of Agriculture from 1933-1940 and as vice president of the United States from 1941-1945. Throughout his illustrious career, Wallace remained committed to advancing plant genetics.

The Henry A. Wallace Chair will support a faculty member who applies modern technology to plant breeding and will oversee research conducted by students, faculty, staff and industry professionals at the Indiana Corn and Soybean Innovation Center.

“It’s fitting for the endowed chair to be named in honor of Henry A. Wallace,” said his grandson, David Wallace Douglas. “He held a strong belief in the value of research and development to continuously improve crop performance, which would ultimately improve the livelihood of farmers.”

DuPont Pioneer has pledged funding for the Henry Wallace Chair in Plant Sciences over a five-year period. This multi-year investment qualifies for the College of Agriculture’s Endowed Chair Challenge and will generate an additional gift of $1 million from a College of Agriculture alumnus.