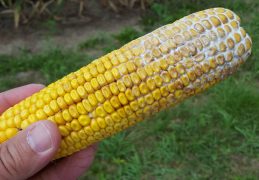 The Farm Journal Midwest Crop Tour is underway. The eastern leg started in Ohio Monday and moved into northeast Indiana and then southward. Issues in the northeast part of the state quickly became evident in the update from the tour with our tour reporter Ty Higgins, traveling with Steve Fellure a farmer from Attica, Indiana.

“In Ohio we had a couple of good stops and a couple of average stops,” Higgins said. “As we got into Indiana we saw some variation with corn yields anywhere from just over a hundred to 201, and we saw pod counts in soybeans, a 3-foot by 3-foot square, drop dramatically in the Hoosier state. You can just tell that a lot of areas in northeast and north-central Indiana missed a lot of rain.”

Fellure observed that those areas had a lot of rain early and then it shut off for a long time. “The reason for the lower corn yields has to be for sure less than ideal growing conditions because of lack of rainfall.”

It amounts to interesting challenges this year that led to interesting samples brought roadside by tour agronomists Monday. “We had a barbell ear,” Higgins said. “We had some Diplodia, and a little bit of everything.”

Fellure said they saw corn just past the blister stage along with some very thin spots in some of the corn “due to that early rainfall where it was probably too wet to get back in for timely replant, so Mother Nature was in control.”

Eric Miller, Indiana Field Agronomist with DuPont Pioneer, said that it is unreal that farmers would be asking for moisture after the wet spring that delayed planting and caused some planters to make another round on replant acres.

With all of the rain early on, Miller was expecting to see his state’s fields, particularly soybeans dealing with disease and insect pressures. But, as he found out from tour scouts Monday night in Fishers, Indiana after Day 1 of the crop tour, many fields were looking good.

Tuesday the crop tour goes from Fishers, Indiana to Bloomington, Illinois. Miller says there is an expectation they’ll find less replant and less planting date variability west of Indianapolis, and yield potential should be better overall.

Monday night, Farm Journal released their data for Ohio. Corn yields came in at 164.62 and soybeans, which are measured by the number of pods in a 3 foot by 3 foot square, averaged 1107.01.

You can ride right along with the scouts all this week by following the tour online at www.FarmJournalPro.com. You can also keep track of the progress on twitter with #fjtour17.

HAT coverage of the crop tour is sponsored by Seed Consultants, Simple the Best Value in the Seed Industry.