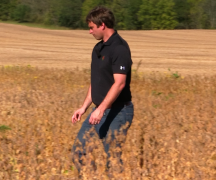 Near Richmond, Indiana in the central part of the state’s eastern border, soybean harvest is well underway but not a lot of corn has been harvested yet. Some reports on those bean yields are a little underwhelming, but early corn numbers are impressive.

Product Manager at Seed Consultants, Matt Hutcheson said recent weather is likely a cause of the drop off in soybeans.

“We are hearing yields average or slightly below average,” he told HAT. “In some areas where there is normally high 60 to 70 bushel averages, we’re seeing 60, so we’re a little off. That’s possibly because of some stress conditions we’ve had. It has been fairly dry here in the end of summer as we move into fall, and so I think it has taken a little bit of the top end yield out of these fields.”

Early corn yield reports range from 200-240 bushels per acre, with field averages above 210 in many cases. The weather recently has been friendly to the corn crop and Hutcheson says it could lead to good test weights. 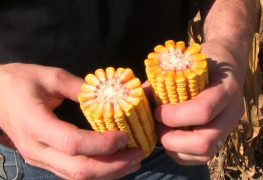 “For those areas where we’re hearing those yields, we did have fairly regular rainfall throughout the growing season and some of those hybrids that are earlier maturities took advantage of that. Even though we had some drier weather here at the end of the season a lot of those hybrids were pretty far along. We have had some cooler weather to finish out the growing season which has allowed for an extended grain fill period. We’re possibly seeing some of that yield improvement out of the kernel development late into the season, and with that extended development we could see some heavier test weights and better grain quality.”

For areas with heavy rains early this season, Hutcheson is still concerned about potential stalk integrity issues because of leeching and denitrification that may have occurred. Hutcheson’s advice is to walk several parts of those suspect fields, focusing on areas you know were predominately wet and may have demonstrated nitrogen deficiency. Those will be the corn fields to put first on the list for the combine.

See the soybean and corn crop update video with Hutcheson at the HAT YouTube channel.