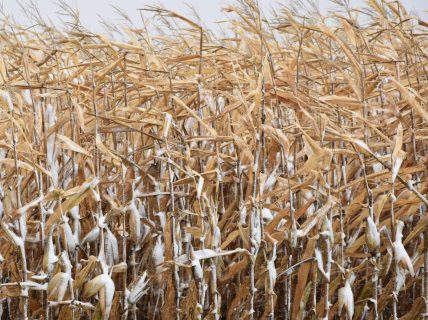 A blast of winter weather a week ago created an unwelcome break in the Indiana harvest that was picking up steam for those farmers who aren’t finished. In a Pioneer agronomy update, Brian Schrader says harvest did stop altogether for the farmers in his east-central Indiana territory.

“I think a lot of the folks in my geography weren’t able to get back into the field probably until Friday afternoon or into Saturday,” he said. “The corn that was on the stalks stayed because of the colder temperatures. It doesn’t take very long when you’re intending to harvest that to really gum up a harvest machine, and so we didn’t get started again until well into Friday afternoon or Saturday morning for a number of folks.”

Schrader has no doubt those farmers will eventually get all of the crops out.

“As we went through the weekend things were good, conditions for this week look to be pretty good and any type of precipitation looks like a few days off,” he said. “So, I really think for the geography that I cover by the end of the week to first part of next week we could be pretty well done with our harvest finally. I think we’re beyond the national average locally, but we do have some work yet to get in order to get done.”

Even with the late season there has been some fall field prep post-harvest, an impressive amount of it according to Schrader.

“Certainly not what we would like to have only because of the late harvest timing and all the work that needed to be done,” he told HAT, “but I do think there’s been a fair amount of deep tillage that has been done, sub soiling or those kind of things, and then follow-up as a preparatory for their last pass in the spring for those that do that prior to planting.”

He added very little fall anhydrous has been put on so far and Schrader isn’t sure much will be done. But he’s pleased with the amount of tillage progress made even though it falls well short of the desired percentage completed.