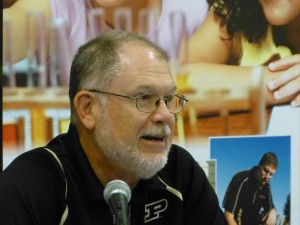 Farmers with recently planted and newly emerged corn need to watch their fields for cold injury, even though much of the damage likely won’t be known until harvest, a Purdue Extension corn specialist says. Corn planting has been off to a slow start for Indiana farmers due to cold temperatures and soggy soils. On May 5 the U.S. Department of Agriculture reported that 20 percent of Indiana’s corn crop had been planted, compared with a 34 percent five-year average. Much of what has been planted went into cold soils, meaning farmers need to watch the crop for injury as it emerges and determine whether replanting is necessary. “Where soil moisture was acceptable for planting, some growers accepted the risks associated with cold soils and corn germination or initial seedling development and planted corn,” Bob Nielsen said. “Should they be concerned about the health of their newly planted and, in a few cases, newly emerged crops? We’ll know for certain come harvest time, but in the meantime, we can talk about possibilities.”

For newly planted corn, one of the possibilities is what researchers call “imbibitional chilling injury.” This type of injury happens within 24 to 36 hours of planting when the kernel absorbs, or imbibes, water and begins the germination process. When it’s cold, this can cause damage to plant cell tissues.

The symptoms of imbibitional chilling injury include kernels that are swollen but not showing other signs of germination; or slowed growth of the radicle root or coleoptile (sheath tissue that protects leaves during emergence) once the initial germination occurs.

“This type of chilling injury is more closely related to physical damage to the outer cell tissues that literally cause death of the plant part or inhibit further elongation of the affected area,” Nielsen said.

That means injury can include stunting or death of the seminal root system, deformed elongation of the mesocotyl and either delayed or failed emergence.

The mesocotyl is the part of the plant that connects the crown and the seed. During emergence, the mesocotyl extends and pushes the coleoptile toward the surface. Damaged sections of mesocotyl tissue stop growing, while healthy tissue continues to grow longer.

If that occurs, Nielsen said damage can range from minor foliar injury to death of all exposed tissue. “The good news is that the all-important growing point region of a young corn plant remains below the soil surface, safe from exposure to frost, until the V4 to V6 stages of development,” he said. “As long as temperatures are not lethally cold, ‘simple’ frost injury usually doesn’t literally kill such young corn plants.”

Typically, Nielsen said, damaged plants can start to show recovery in 5-7 days, depending on temperatures. Corn plants subjected to repeat frost events, however, can sustain permanent stunting or death. But with so little corn in the ground or emerged so far in Indiana, and with few nighttime temperatures low enough for frost in the last two weeks, Nielsen said it’s unlikely there has been any above-ground corn injury.

As corn starts to emerge, farmers need to get out and look at their fields to see if there’s been any cold injury and, if so, assess the severity. “Only time will tell whether corn planted during the past few weeks has suffered from the cool soils during germination,” Nielsen said. “Obviously, those ‘early’ planted fields should be scouted over the next few weeks for emergence problems.

“Come October, we will know for certain whether this year’s early planting risk-takers will have ‘won the game’ or not.”