On June 1, E-15, a higher blend of ethanol fuel, will no longer be sold in Indiana this summer without last minute EPA action. This is just the latest anti-ethanol move made by the EPA. When EPA administrator Scott Pruitt visited Indiana several months ago, he promised Indiana Governor Eric Holcomb and a gathering of Indiana farm leaders that things would be different at the EPA. Yet, it seems it is the same old policies guiding the agency.

This week, several ethanol groups and the NCGA took the agency to court accusing them of secretly granting waivers to refiners that allow them to blend less ethanol. Brian Jennings ,with the American Coalition for Ethanol, told HAT that the EPA continues to give the oil industry everything wants, “These waivers have been granted to 30 different refineries.”

“EPA is trying to undermine the RFS program under the cover of night,” said Bob Dinneen, CEO and President of RFA. “And there’s a reason it has been done in secret – it’s because EPA is acting in contravention of the statute and its own regulations, methodically destroying the demand for renewable fuels. With the little information we’ve been able to piece together through secondary sources, it’s clear that EPA has been extending these exemptions to refineries that didn’t qualify for them.”

“EPA left us with no choice but to challenge their systematic cuts to ethanol blending in the U.S. by distorting the intent of the law to grant secret hardship waivers to refineries which in some cases exceed the definition of ‘small’ and fall short of demonstrating ‘disproportionate economic hardship,’” said Jennings. “We cannot sit by and allow EPA to violate the RFS which requires increasing the use of renewable fuels in the U.S.” 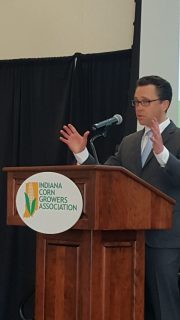 In addition to waivers, the agency continues to delay the removal of regulations that prevent the sale of E-15 blended gasoline during summer months. Jennings says what ethanol wants is the ability to see E-15 year round, “We want to see E-15 sold year round to everyone like it should be.” The Trump administration continues to make statements in support of ethanol, but Jennings says that talk is not followed up with action, “We don’t need any more happy talk, we need action.”