Late Wednesday the Environmental Protection Agency (EPA) announced their decision to maintain the Renewable Fuel Standard (RFS) point of obligation. This is a major victory for the ethanol industry. Oil interests had pressed the agency to change the long standing requirement on who was responsible for blending ethanol into gasoline. The change would have made wholesalers and retailers responsible rather than refineries.

Growth Energy CEO Emily Skor released the following statement regarding:  “We commend the EPA for laying to rest a year of attempts from a small group of oil refiners who have been using every trick in the book to change the established rules for tracking compliance with the Renewable Fuel Standard,” Skor said. 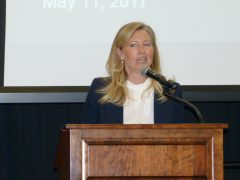 “This one-sided handout would have added regulatory red tape, created havoc in the marketplace and denied consumers access to more affordable fuels with higher blends of biofuels like E15. Growth Energy has led the charge to oppose this effort from the very beginning, and we are grateful to our allies in Congress and to Administrator Pruitt for working with us to protect over 12 years of investment under the RFS.

In their ruling, the EPA said, “We believe that the current structure of the RFS program is working to incentivize the production, distribution, and use of renewable transportation fuels in the United States, while providing obligated parties a number of options for acquiring the RINs they need to comply with the RFS standards.”

Jeff Broin of POET said, “By maintaining the point of obligation for the Renewable Fuel Standard (RFS), the EPA is allowing the system to continue to work as designed. Under the RFS, infrastructure for biofuel-blended fuel is expanding, with opportunities for additional consumer-driven growth. The RFS works, evident from the numerous benefits it allows Americans to enjoy today: cleaner air, fewer carcinogens in gasoline, lower fuel costs and increased energy independence. President Trump has vowed to preserve the RFS. I applaud the President and EPA for standing up to special interest groups within the oil industry who seek to undermine American-made biofuels.”

Brooke Coleman with the Advanced Biofuel Business Council noted, “The push to change the point of obligation by a handful of refiners was never about helping renewable fuels or the consumer. The refiners complaining about the point of obligation are willfully not complying with the law while claiming they are victims. Many of their competitors have figured out how to simultaneously blend more renewable fuels and pad their bottom lines. We very much appreciate EPA clearing the air on this important issue. It’s a good decision for consumers, the environment, and the economy.”