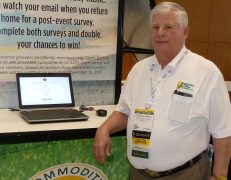 “We’re trying to expand the E15 market the best that we can,” he said. “We’re supporting getting pumps out to the infrastructure so they can handle E15, and this bill would help retailers be able to sell E15 all year round, and it would be very good. Right now retailers are hesitant to put in E15 if they have to change those pumps to something else for the summer months.”

The bill would extend the Reid vapor pressure (RVP) waiver to ethanol blends above 10 percent.

Talk of shifting the ethanol point of obligation last week sparked plenty of terse back and forth between various ethanol groups. National Corn Growers Association CEO Chris Novak said there is much to learn before they can take a position.

“It’s an issue that we need to understand and we need to have more conversation with those types of retailers who, if there is a change in the point of obligation, may find themselves having to comply with the Renewable Fuels Standard when they haven’t in the past.”

Gottbrath from Washington County is a member of the NCGA Ethanol Action Team that will be studying the issue.

“It’s a learning curve. I’ve been on the Ethanol Action Team for three years and I continue to learn, and trying to understand exactly how this affects us. The retailers out there are telling us it’s not a good thing for them and it will make E15, even though it’s available will not be price competitive, so we’re just studying it, trying to figure out how we’re going to benefit.”

Stay tuned, plenty more is likely ahead on this issue.