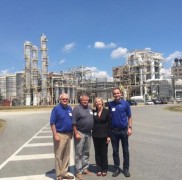 “We are excited to see ethanol production back up and running in Virginia,” said Bowling, who farms corn, soybeans, and sorghum just 100 miles away in Newburg, Maryland. “The Hopewell plant will give Mid-Atlantic farmers another market for their crop. It’s good for the ag economy, and for consumers, who will now have access to renewable fuels grown and produced even closer to home. This is win-win.”

The Hopewell ethanol facility, which opened in April 2014, was the first ethanol operation on the East Coast, producing ethanol from corn, barley, and other small grains. The facility stopped production in August 2015.

Bowling said the return of ethanol production to the East Coast could not come at a better time for the corn industry.

“Corn farmers across the country are expecting another bumper crop in 2016, at a time where prices have already fallen below production costs. The National Corn Growers Association is working together with industry and government to build demand for corn, and bring farmers back to profitability,” said Bowling. “We need to keep investing in our ethanol infrastructure, especially here on the East Coast, to meet demand from consumers where they live and work.”