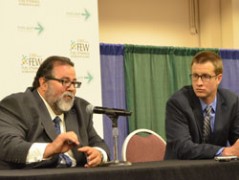 Several new presidential hopefuls in both parties have officially declared their candidacies recently and more are planning to announce soon. During a press briefing at the 2015 Fuel Ethanol Workshop, Bob Dinneen with the Renewable Fuels Association and Brooke Coleman with the Advanced Ethanol Council were asked how they think the candidates, declared and undeclared, rate when it comes to the Renewable Fuel Standard.

Dinneen attended the Iowa Ag Summit in March where nine Republican presidential hopefuls were asked their views on the RFS and was not surprised that the only two who said they were opposed were from Texas – the first declared GOP candidate Sen. Ted Cruz and former Gov. Rick Perry, who just formally declared this week. “That’s a dog bites man story if there ever was one,” said Dinneen. “I would think less of those two men if they weren’t sticking up for their big Texas oil industry.”

Dinneen was surprised by the candidates who did express support for the RFS, some of them publicly for the first time, including former Florida Governor Jeb Bush, who is expected to announce his candidacy later this month, New Jersey Gov. Chris Christie and Wisconsin Gov. Scott Walker, both of whom have yet to declare.

On the Democratic side, another new candidate announced this week was former Rhode Island governor Lincoln Chafee, but the big dog in the fight is still Hillary Clinton and Coleman was impressed with her recent op-ed in the Cedar Rapids Gazette. “It suggested that she understands the different intricacies of the challenges we face in this industry,” said Coleman. “However, one op-ed does not make a candidate and we will have to continue to work with Secretary Clinton to make sure that she is helpful to make sure she is helpful with regard to what we are dealing with in the administration right now because there is no better person to help us than Hillary Clinton when it comes to where the Obama administration is in the Renewable Fuel Standard.”