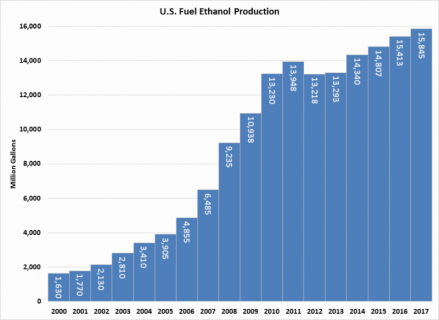 Data released yesterday by the Energy Information Administration (EIA) confirms that the U.S. ethanol industry produced a record amount of high-octane, low-carbon renewable fuel in 2017. According to EIA, the industry churned out 15.84 billion gallons of ethanol, up 3% from the 2016 total and a four-fold increase over the 3.91 billion gallons produced in 2005 when the original Renewable Fuel Standard (RFS) was adopted. The data also preliminarily indicated record domestic ethanol blending, with 14.4 billion gallons blended into 142.9 billion gallons of finished gasoline, equating to a record average blend rate of 10.08%.

“At this point, the so-called ‘blend wall’ is little more than a speed bump on the road to greater consumer choice, lower pump prices, and cleaner air,” said Bob Dinneen, president and CEO of the Renewable Fuels Association (RFA). “Even though 2017 gasoline demand was down a bit from the record level seen in 2016, domestic ethanol consumption was up. That means consumption of blends like E15 and flex fuels like E85 is continuing to rapidly expand across the country. Today, some 1,300 retail stations are offering E15 and more than 4,000 stations are selling flex fuels like E85 to drivers of flex fuel vehicles. Clearly, the RFS is working as intended to transform our transportation fuel market and drive expanded use of domestically produced, high octane ethanol.”

While 2017 data for individual state ethanol blend rates is not yet available, data recently released by EIA showed that 30 states and the District of Columbia had average inclusion rates above 10.0% in 2016.