According to EIA data, ethanol production averaged 987,000 barrels per day (b/d)—or 41.5 million gallons daily. That is down 7,000 b/d from the week before. The four-week average for ethanol production dropped to 996,000 b/d–the first time in 25 weeks to hit below a million b/d, for an annualized rate of 15.27 billion gallons. Stocks of ethanol increased 2.2% to 23.3 million barrels, closing in on the record high recorded a month ago. Imports of ethanol were nonexistent for the 35th straight week.

Average weekly gasoline demand scaled back to 386.7 million gallons (9.206 million barrels) daily. Refiner/blender input of ethanol averaged 932,000 b/d, 2.2% higher than the prior week and the highest in 2017.

Expressed as a percentage of daily gasoline demand, daily ethanol production was 10.72%. 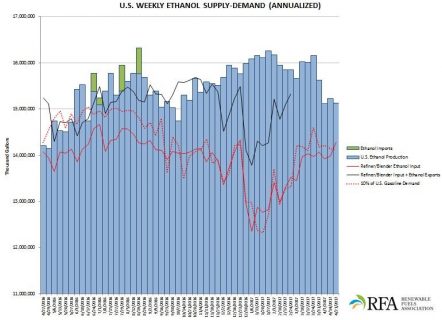