According to EIA data, ethanol production averaged 1.019 million barrels per day (b/d)—or 42.8 million gallons daily. That is down 35,000 b/d from the week before and stands as the lowest weekly production volume in 18 weeks. The four-week average for ethanol production dipped slightly to 1.04 million b/d for an annualized rate of 15.94 billion gallons. Stocks of ethanol increased 1.7% from last week to a new record high of 23.7 million barrels—7% higher than year-ago levels.

Imports of ethanol were nonexistent for the 32nd straight week.

Expressed as a percentage of daily gasoline demand, daily ethanol production was 11.02%, a 20-week low. 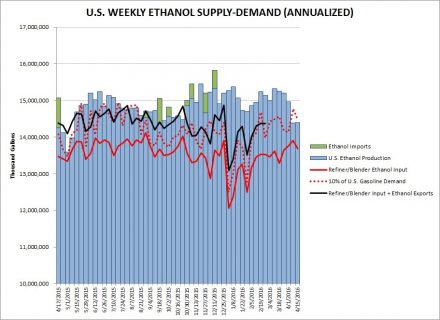