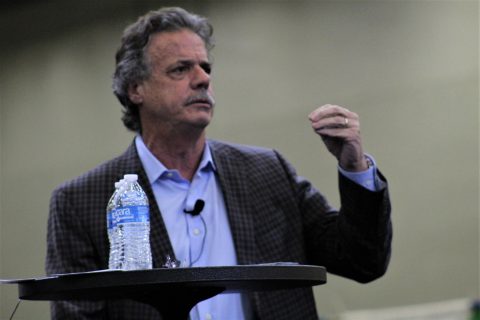 Saturday at the American Farm Bureau Annual Convention, Dr. Mike McCloskey, owner of Fair Oaks Farms, took the stage to address a crowded room about the steps they followed after an undercover animal activist group targeted their farm. They were made aware of the video nine months ago and then it was released in June.

McCloskey told Hoosier Ag Today that several practices have changed since then, including an even more robust training program for employees and the use of cameras.

“In today’s world and in large operations like ours it was a mistake on my part to not have cameras, but now we have cameras everywhere we have any interaction with a cow and an employee, and we review that footage constantly. There’s not one piece of footage that does not get reviewed on an ongoing basis.”

McCloskey said he initially felt having the cameras would lead to a culture of mistrust with employees. Now that those cameras are in place, he’s found that quite the opposite is true.

“They’re very happy with it. As a matter of fact, 90 percent of the employees have commented that they’re happier with the cameras. They’re proud of showcasing what they do. They work very hard and they’re very dedicated to doing everything they’re learning, so it’s been a rewarding experience to put these cameras in.”

McCloskey reiterated that the well-being, care, and health of each animal is their number one priority in all they do.

“We thought we had an excellent program, but we realize that with the event that we had that we need to make sure that we have the best program. And if we ever do have another event of any type of any abuse of our animals, that we could detect it immediately and put corrective actions in. I believe we’re at that stage today.”

We’ll have more with McCloskey tomorrow about the new robotic dairy experience coming to Fair Oaks in the spring, another example of how they are improving the well-being of their animals through the use of technology.

Hear my full interview with McCloskey by clicking the play button below.