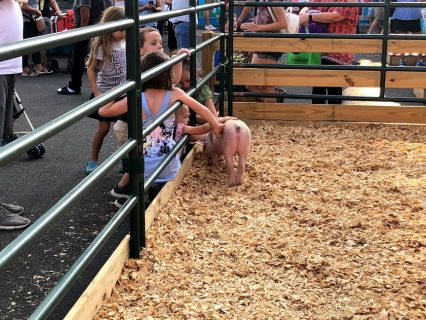 Animal Town is a new interactive animal experience at the Indiana State Fair this year. Presented by Indiana Farm Bureau, Animal Town has eight different species of barn yard animals for families to learn about, see up close, and even pet. Animals are all over the fairgrounds, so why was it important to add this exhibit? Stephanie DeCamp, Director of Education for the Indiana State Fair Commission, answers that question.

“Visitors would come the second weekend and want to see llamas. Well, llamas are only shown the first weekend of the fair. So, this kind of came to fruition through that suggestion of wanting to see those animals. You can’t see a draft horse all 17 days (of the fair).”

DeCamp added that they really wanted to bring a free, family friendly exhibit to the fair. They also wanted the experience to be educational.

“We do a live, ‘Let’s Talk Livestock.’ So, an animal is brought to the demonstration pen and it’s about a 20-minute demonstration on how the animals are raised what they’re used for. And then the visitors have an opportunity to come and have a one-on-one interaction with them.”

Those talks are done daily at 1pm, 3pm, 5pm, and 7pm throughout the fair. DeCamp says Animal Town has been a big hit.

“It’s been a huge draw; people everywhere. It’s never been a dead or empty exhibit. Even when the sun goes down and the exhibit is supposed to close at 9, there are still people coming in and looking at the animals.

DeCamp told HAT that they are planning on this becoming an annual exhibit. The Indiana State Fair concludes on Sunday the 19th. Animal Town is located just east of the Hoosier Lottery Grandstand next to the Communications Building.