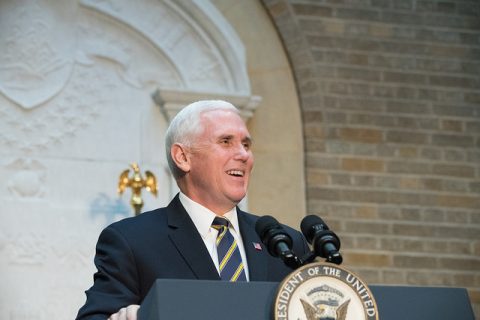 Vice President Mike Pence made several campaign stops last week, including locations in Kansas and Iowa. Going into the trip, a spokesman confirmed that the vice president would bring up the yet-to-be-finished farm bill during his speeches. The White House message is similar to that of the House Republicans: The unemployment rate is low and a lot of jobs are open. Because of that, Republicans want Democrats to get on board with more work requirements for millions of food-stamp recipients.

The House farm bill would greatly expand the pool of able-bodied workers, all of whom would be required to work an average of 20 hours per week. Politico says that’s an idea “dead on arrival” in the Senate. However, the White House also wants to ensure that Democrats don’t get what it calls a “free pass” for voting no on the farm bill. In the meantime, USDA already has a proposal in place to tighten work requirements on able-bodied adults under review at the Office of Management and Budget. Ag Secretary Sonny Perdue doesn’t want to get ahead of Congress on the issue, which means it’s uncertain as to when his agency will release the rule.