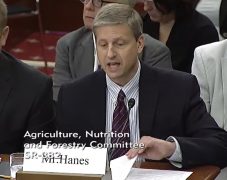 Agriculture Department export programs are key to keeping conventional and organic producers in the black, as lawmakers write the next farm bill. That was the message from producers and ag lawmakers at a Senate farm bill hearing.

USDA export assistance programs have no funding guarantee when their 2014 farm bill authority runs out in 2019. Among them are the Market Access, Foreign Market Development and Technical Assistance for Specialty Crops programs, returning more than $28 for every dollar invested, or more than $2 billion a year in net farm income, based on a study by Informa Economics.

“More than 13 percent of the beef and beef variety meats we produce in this country are now exported, and exports account for more than 25 percent of the pork produced,” said Greg Haines with the U.S. Meat Export Federation. “During the first half of this year exports added an average of $270 per head for every steer and heifer slaughtered in this country, and $55 to the value of every hog. As a producer that can be the difference between being in the red and the black.”

Haines says red meat exports add some 45-cents to a bushel of corn.

But verification is not enough. Ag Chair Pat Roberts says the National Organics Standards Board is plagued by “uncertainty and dysfunction,” hampering regulations needed to keep up with rapid growth and innovation in a sector, many growers now depend on to boost sinking margins.