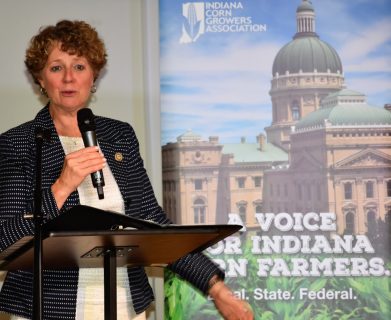 Indiana’s corn and soybean advocacy groups held a first ever Stewardship Tech in the Field event Tuesday on the Mike Shuter Farm in Madison County. At lunch the Indiana Corn Growers Association and Indiana Soybean Alliance offered another version of their Shop Talk series. Farmers heard about agriculture issues from the perspective of U.S. Representative Susan Brooks.

She is not only hopeful the new farm bill passes congress on time, she is optimistic it will.

“It’s the top priority for Chairman Conaway to get it done on time, not to drag it out but to get the negotiations done,” she told HAT. “The conference committee is negotiating now throughout the summer August recess and I’m hopeful that we do get it done on time by the end of September.”

There is an important component of the farm bill where there is a distinct divide between the House and Senate, the food stamp or SNAP program. But they aren’t far apart on the all-important crop insurance element.

“I am optimistic about crop insurance,” she said. “I don’t think there’s much daylight between the versions on crop insurance, maintaining it, ensuring that it’s there for our farmers.”

But the SNAP divide could mean long debates and delays in getting a final bill. 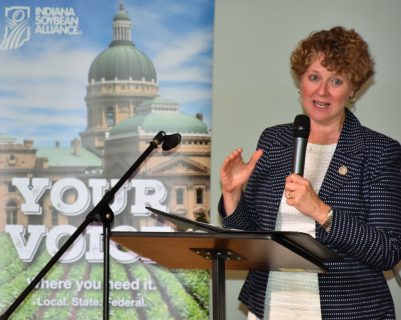 “I think that is where we have probably the biggest difference,” Brooks said. “We require in the House version and it’s not in the Senate version, a 20-hour work or training requirement for those able-bodied adults between 18 and 59 years of age who don’t have dependents under the age of six that they care for, or if they care for those with disabilities or seniors. That would be another exception. But we know we have a workforce shortage in the country with such low unemployment. We believe in the dignity of work and trying to get people back into the workforce. This is not to push people out of the SNAP program. It is trying to get them back in the workforce.”

Congresswoman Brooks has heard from many farmers in recent months about ongoing trade disputes. She said their message to her is they want access to markets and they’re open to renegotiating agreements for a period of time.

“However, they don’t want it to go on very long. They would love of course to see commodity prices increase but they want access to as many markets as they can get, and I think the administration is opening up some markets and there have been some positive things that have been happening. But they need to happen quickly, and I’ve been a member who has reached out to the administration asking that they be very targeted and that they be fast, that the negotiations not take too long.”