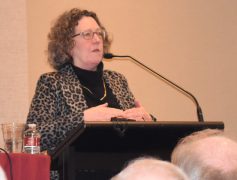 Seventeen Republican House and Senate members and twelve Democrats are working for resolution of a tax reform bill to get to a final bill that can be passed on to President Trump. Pat Wolff, Senior Director of Congressional Relations at American Farm Bureau says the goal of tax reform is to get tax rates down and keep the important business deductions that farmers use in dealing with the uncertainties and variables inherent with agriculture.

Wolff said the bill will reduce the amount of money farmers send to Washington as taxes. That’s a good thing since they will have more money to invest in their farming business.