The non-profit and bi-partisan group Farmers for Free Trade is an organization dedicated to supporting and expanding export opportunities for American farms and ranches. An important voice joined the group Tuesday. American Farm Bureau President Zippy Duvall joined the principals of Farmers for Free Trade to urge state and local ag groups, agribusinesses and communities to join as well.

“They need to understand they need to be involved in speaking out, so American Farm Bureau joining into Farmers for Free Trade organization is our way of showing that we need all the other organizations, whether they be commodity groups or agribusinesses or even just communities, they need to be part of this movement to talk about how important foreign trade is to our economies and our farmers and ranchers in keeping rural America healthy.” 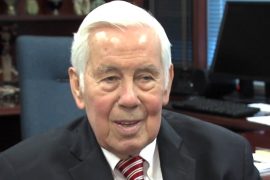 “So much has been said about how agricultural America has been overlooked by politicians in general,” Lugar said. “This is a wonderful opportunity for democrats and republicans who are farmers and who are living in rural communities to rise up and be voices who are not heard very often. We’re now in negotiations with NAFTA. We’re in negotiations with other countries. We really have to be successful if there is in fact at the grassroots of the United States agriculture to be a change, and there needs to be a change. Income is going down. Sales are going down. This is a desperate opportunity and it must be seized.”

Sara Lilygren, board president of Farmers for Free Trade said they are beginning state campaigns in all 50 states to engage local city councils, mayors, governors and economic commissions. They’ll prioritize states that produce major trade commodities that are being impacted by trade policies being debated and decided in Washington DC now.

The Farmers for Free Trade campaign comes at a time when trade is under fire despite the fact that U.S. farmers export half of all major commodities, contributing to a $20 billion ag trade surplus this year and supporting millions of rural jobs.