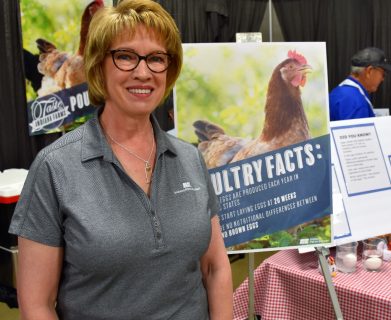 Thousands of Hoosiers have visited the Indiana State Fair, which draws to a close this weekend. Thousands, 4,971 exactly, also went through the Indiana Farm Bureau building for the three days of the Taste from Indiana Farms. They sampled food items from 12 products grown in Indiana, so there was tasting, but there was also talking. Second vice president Isabella Chism said it’s a great chance to dispel some myths about food production.

“One of the places that I heard that the most was with the eggs and poultry,” she explained. “This year they’re serving eggs and they’re talking about different things related to eggs, like brown shelled eggs and white shelled eggs. The only difference is the chicken that it came from. Then someone asked the question are these GMO eggs. Well, the answer is no, there are no GMO eggs. So, we begin to debunk some of these myths out there, some of the things people are believing because they see it on the internet or they hear it from a friend or a neighbor.”

She told HAT when it comes to potential audience, it doesn’t get any better than the numbers generated by the state fair.

“This is the largest one on one consumer event that we have right now, so I don’t see it ending anytime soon. It’s been a marvelous effect on the people who have come through.”

It plays right into the mission of Indiana Farm Bureau, educating the public about where their food comes from and supporting agriculture. But Chism says it “also feeds us, because those of us in agriculture don’t understand that people don’t understand what we do until they ask a question.”

On Wednesday Lt. Governor Suzanne Crouch and Indiana State Department of Agriculture welcomed students in agricultural programs at urban schools on Diversity in Agriculture Day. They did the taste tour and Chism said it was an amazing experience that should be an annual event.

“You’ve taken students out of a classroom. They have no experience with agriculture. All of them answered they had never stepped foot on a farm. We took them through and they were just kind of looking at things. Some things they’re familiar with and they’ll taste them, some things not so much and they’ll hesitate, but they asked questions. They paid attention, and then we have a prize wheel at the end where we check to see what people are retaining, and they retained the information very well. So, I was very impressed with them and want to do this again every year.”

The fare at the tasting event included lamb brats, goat cheese, and yogurt.