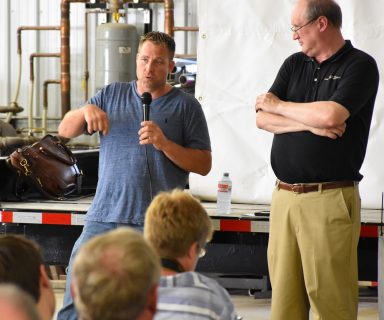 On this year’s Purdue Farm Management tour, one operation gave visitors a glimpse into their definition of diversification. At Dennis Grain and Farms just north of Huntington there are corn, soybean, wheat and sunflower fields. There is also Dennis Grain, a commercial elevator which is now 100% Plenish high oleic soybean. Even though this is a fast-moving operation where there is always something happening, Jason Dennis says they waited, and waited, and waited to plant this year like everyone else.

“But luckily Mother Nature has helped us out this last couple of weeks here and we’ve got something like 90% of what were planning on planting to corn planted, and we’re down to one field on soybeans. If it gets done that would be great. If it doesn’t I still can sleep at night knowing I got 95% of my stuff done.”

“The 20 inch and narrower rows are all about water retention in the ground and shading out and canopy on that crop and we can canopy that closer. Being that we’re at the end of June right now and a lot of guys have corn that’s V2 to V4, we’re going to be able to canopy a week sooner than 30 inch corn, which gives me seven more days of less sunlight, less heat to evaporate that water.” 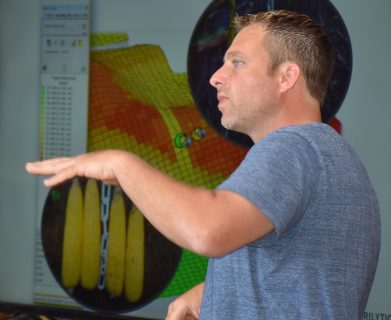 Dennis is adamant about taking care of his corn crop during the growing season which means walking the fields and feed that crop when needed.

“Make sure that plant is never starving of anything which includes a lot of walking and checking it out. Does it need a little bit of nitrogen? This year possibly might even be potentially some foliar. I don’t know. We don’t usually do that, but we want to make sure that plant is as healthy as possible.”

Hear more from Dennis in the HAT interview:Jason-Dennis