The 63rd Farm Progress Show opened on Tuesday just outside Boone, Iowa, hosts 600 exhibitors, and could draw 160,000 people to the show. Often the show attendance hinges on the weather. On Monday, the Ames Airport area got around three inches of rain, that heavy rain did not fall at the Expo site. There were only a few small mud  puddles on the Expo Grounds for day one of the show. The highlight of the show is daily field demonstrations, including GPS equipment in side-by-side comparisons.

As the show opened corn, and soybean prices fell on the futures market and Indiana cash corn prices dipped below $3 at some locations. Despite the deepening depression in the farm economy, the show exhibitor space is sold out. “We have a sold out show field; we actually had to add a tent,” said Matt Jungmann, Farm Progress Show Manager. “It is as big, or bigger than 2014, which we didn’t expect. I think speaks of the resilience of the ag industry.” 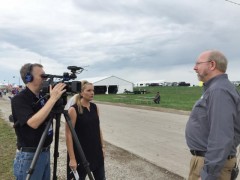 Many seed, and equipment companies use the show to introduce new products and technology. The National Corn Growers Association is using the show to deliver its message. “The clear intent of our effort is to communicate the economic challenges farmers are facing and leverage NCGA’s position as a thought leader to raise awareness and drive solutions,” said Wesley Spurlock, NCGA’s incoming president. “We are working on everything from developing new fuel infrastructure for greater consumer access to ethanol, to trade issues, to combatting regulatory barriers; and virtually all of our issues come back to the same thing: demand. The quickest and best way to address the looming economic crisis is increasing demand and grinding corn.”

NCGA Chairman Martin Barbre, President Chip Bowling, incoming First Vice President Kevin Skunes, and CEO Chris Novak are all participating at the Farm Progress Show to make the most of having so many key industry participants in one place.