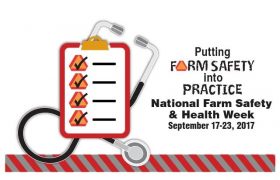 This is National Farm Safety & Health Week and the third week in September has been recognized as such since 1944 to make sure there is an emphasis on safety as harvest ramps up in rural America. The theme this year is Putting Farm Safety into Practice, and as Bill Field from Purdue explains, both farmers and rural motorists need to participate.

“Everybody has a right to the road, especially those that live in rural communities, because that’s why those roads were built,” he told HAT. “They were designed for bringing things from farm to market and were used to be called farm to market roads. Now they’ve become much more traveled because people are moving out into the countryside. We’re seeing a lot more settlements and development of historical farm land, and so there’s a lot more crowded conditions on these roads especially during fall harvest, and everybody needs to remember that these roads are for people to get their jobs done as well as for folks to get back and forth every day to their jobs in town. So there’s got to be an understanding that we have to share these roads together.”

What’s the major cause of accidents on roads during harvest? Field says it is high speeds. 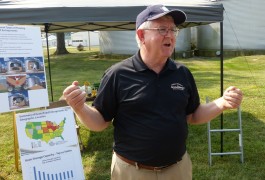 “A good example of that is what we’re seeing in the Amish community,” he said. “We saw probably the highest number of buggy related incidents that I’ve ever seen this past year, 2016. That really is a mix between very slow moving vehicles that are being pulled by horses and people who just really want to push the limits for traveling on these country roads, and that mix isn’t very good.”

Field says over the next couple of months, farmers and motorists need to do all they can to accommodate each other’s needs. The more we do, the safer harvest will be.

Field is Professor in Agricultural and Biological Engineering at Purdue University.

Data from the Department of Labor shows the agricultural sector is still the most dangerous in America with 570 fatalities, which equals 22.8 deaths per 100,000 workers. When combining all labor sectors the death rate was 3.4%.