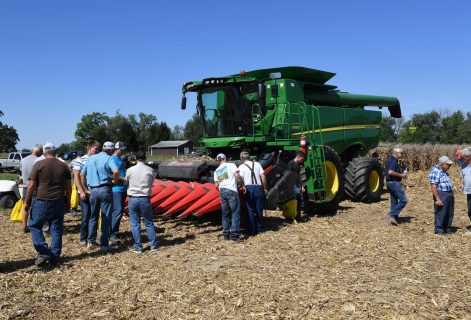 The 3-day Farm Science Review in London, Ohio opened Tuesday just as the China and U.S. trade war kicked into another gear. Farmers at the show are scouring the equipment and technology exhibits, and they are certainly thinking about harvest and how their own crops will yield when they get in the fields. But, are they also tuned in to the news of the new rounds of tariffs being implemented by both China and the United States?

Dustin Watson from north-central Ohio, visiting the show Tuesday, some farmers talk about the trade war and others are tight-lipped.

“I think at first everybody like what Trump was doing, but I think people are starting to get a little bit nervous just because it’s been going on for so long and prices keep declining every day,” he said. “We want to make a living at this too so they’re going to have to figure something out and get these prices going back the right way.”

With the bottom line shrinking it is more challenging to invest in new products being offered at the show, but Watson and others want to stay on top of new product developments.

“You don’t want to get behind the 8 ball, so you have to keep looking at what’s out there and keep yourself familiar with what they’re bringing out new to the market,” he said. “We’re standing here by John Deere now and they’ve got a lot of nice, new stuff coming to market and everybody wants to put it on their farm and see what it’s going to do. Right now, I think a lot of people are going to be sitting back waiting to see what these markets are going to do, and if they do rebound people will know what they want to go buy.”