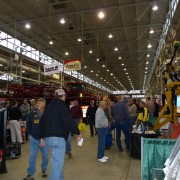 The Indiana/Illinois Farm Equipment and Outdoor Power show, held each December at the Indiana State Fairgrounds, will not be held in 2018. Dick Sherman, owner of the show for the past 39 years, has announced he will no longer produce the event. “Last year was a particularly difficult year and the response to the preliminary space application that we sent out over a month ago for next year has told me that there is not enough interest from equipment companies to produce a quality show,” Sherman said in a note this week to friends and exhibitors.

Sherman left the door open for another organization to take over the event, however, “Whether another company will attempt to produce a show is a question I can’t answer. As of now, the answer is probably not and the show more than likely will not run again. It will definitely not run with my involvement.” Sherman and his wife Jean will continue to operate the Quad City farm show in Rock Island, IL.

The Indiana/Illinois show was not only one of the first shows in the indoor farm show season, but had a reputation as a quality show that allowed farmers to spend more time at exhibits and really get useful information. Unlike larger shows that drew a very diverse crowd, the show focused on reaching Midwest row crop farmers who came to buy not just look. It also featured a free seminar series that drew top experts in agriculture.

The show originally was held at the convention center in downtown Indianapolis. As the size of the equipment grew, the show was moved to the West Pavilion of the State Fairgrounds which had the ability to handle the large machines. Sherman said he will miss the farmers and exhibitors who have attended the show year after year, “Jean and I thank the many of you who have been with the show for so many years, people we consider our friends and who we will greatly miss.”