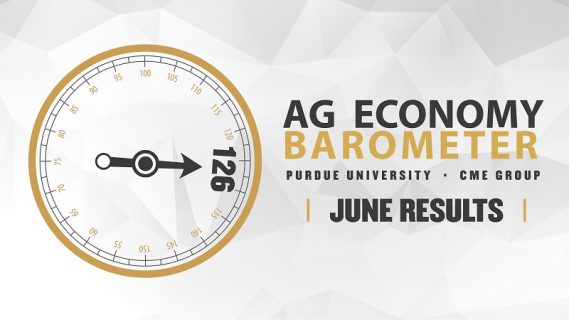 While farmers are not singing “Happy days are here again,” the latest Purdue University CME Group Barometer of farmer attitudes showed an uptick, says Jim Mintert, with Purdue. “The Barometer, based on a mid-month survey of 400 agricultural producers across the U.S., increased to a reading of 126 in June, up 25 points from May,” he stated. “Increases were also seen in both of the barometer’s sub-indices. While the Index of Current Conditions only saw a modest increase, up 13 points from May, to a reading of 97, the Index of Future Expectations jumped 33 points, to a reading of 141 in June.”

Improvements in crop prices and progress on trade issues were credited for the improvement in farmer sentiment. “This year farmers have faced an extremely wet planting season and uncertainty surrounding trade discussions, however, a crop price rally coupled with USDA’s announcement of its 2019 MFP program and Congress’ passage of the Disaster Aid Bill made farmers more optimistic,” said Mintert. “While this combination provided a boost to a struggling ag economy, it remains a challenging economic environment for farmers.”

Lastly, farmers were slightly more optimistic regarding the resolution and impact of the ongoing trade dispute with China. From March through May, the percentage of producers expecting a beneficial outcome to the trade dispute declined from 77 percent to 65 percent; yet, on the June survey, that percentage rose slightly to 69 percent. Farmers were also asked whether they believe the dispute will be resolved by Sept. 1. In mid-June, 32 percent of producers expected it to be settled by early September, whereas just 20 percent expected the dispute to be settled by July 1 when this question was posed in mid-May.