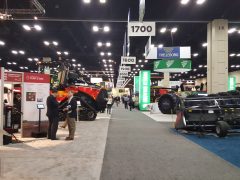 The Purdue/CME Barometer of Farmer Attitudes will be released  today and is expected to show continued optimism by the nation’s producers.  Judging by the large crowd and busy trade show at Commodity Classic last week, producers are upbeat about the coming year.  Despite lower prices and the tough financial shape many growers are in, the optimism remains high.

Successful Farming reported that a number of growers they spoke with at Commodity Classic were very upbeat. Scott Wettstein, Lidgerwood, North Dakota says that, according to the stats given here at the Commodity Classic, farmers are all optimistic about the future of agriculture. “After the Presidential election and last year’s good crop, apparently has something to do with that. Personally, I’m optimistic that we are going to raise another nice crop like last year,” Wettstein says. “I’ve been saying this for three years, but I’m thinking there is going to be another opportunity to sell corn above breakeven. You have to be ready to jump on that.”

Bob Huttes, a Roca, Nebraska, farmer who grows corn and soybeans, says, “Things are not good out there in farm country. Everyone that I know have cashflows that are suffering. It’s about as bad as I’ve ever seen it. I have farmed through some difficult livestock times, but we made it through somehow. And I’m hopeful for the future of agriculture.”

Mark Westfall, a Woodstock, Ohio, farmer says that he has always noticed in his career that challenging economies can be looked at with optimism. “There is more opportunity in tough times than there is good times, if you are financially solid. During those good times, everybody is bidding against you to buy anything and everything,” Westfall says. “I’ve been farming for 47 years, and our biggest strides forward have been in really difficult times.”