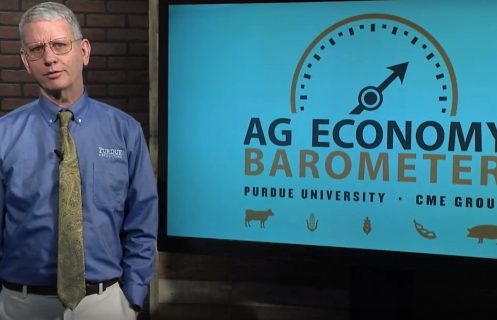 Farm financial stress may be playing a role in the drop in the newest Purdue University and CME Group Ag Economy Barometer. The March report just released went three points lower, based on sentiment of the 400 U.S. agricultural producers who were surveyed. Twenty percent of those surveyed said they expect their farm’s performance to be “worse than” in 2018, and fifty-two percent are less optimistic about their farm’s financial future compared to a year earlier.

Jim Mintert from the Purdue Center for Commercial Agriculture, and the principal investigator for the barometer, explains how they identified the stress factor.

Mintert said they then asked those who expected to have a larger operating loan what the reason was. 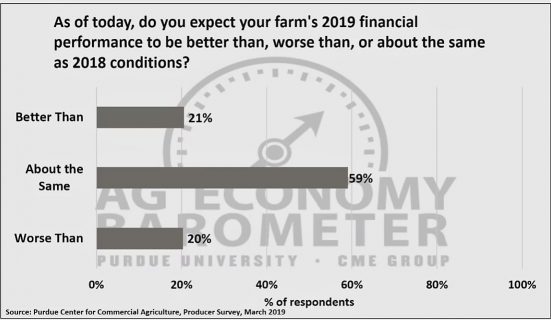 “Twenty-one percent of them said it was because they were carrying over unpaid operating debt from prior years,” he said. “We asked these same two questions in January and the responses were quite similar. The result is an implication that about 5 to perhaps 7 percent of U.S. farms are suffering from some financial stress, using that unpaid operating debt being carried over into the current years as a measure of stress.”

There was optimism about the future of agriculture exports. Only 8 percent of producers in the March survey said they expect agriculture exports to decrease in the next 5 years while 68 percent expect exports to increase, which was the most optimistic perspective on agricultural exports provided by farmers since the Purdue researchers began posing questions on exports in May 2017. With respect to the trade dispute with China, 77 percent of producers were confident that it will be resolved in a way that benefits U.S. agriculture; however, less than half expect the trade situation with China to be resolved before July 1.

The barometer’s Index of Future Expectations dropped 6 points to 139 and the Index of Current Conditions remained relatively unchanged at 120.

Read the full March Ag Economy Barometer report at https://purdue.edu/agbarometer. The report includes insights into producers’ attitudes toward farmland values and making large farm investments. The site also offers additional resources, such as past reports, charts and survey methodology, and a form to sign up for monthly barometer email updates and webinars. Each month Dr. Mintert also provides an in-depth analysis of the barometer. See it at https://purdue.ag/barometervideo.