The monthly pulse of farmers’ level of optimism took a dip in February, but it is still the 2nd highest measure since the Ag Economy Barometer debuted a year and a half ago. Purdue and CME Group say there was a drop from January’s record 153 to 134. David Widmar with Purdue said the drop can be attributed to a couple of factors, including some expected moderation after continual increases since October.

“Another important element to keep in mind is that we’re in the final stages of planning the 2017 crop,” he explained, “so we’re lining up lines of credit, lining up the crop budget, and there’s still tough times out there in agriculture. I think part of this is gravity of the 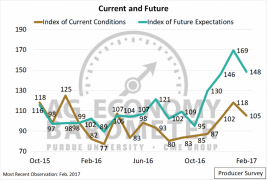 difficult budget situation. It’s improved from last year, but it’s still a difficult outlook. I think producers are starting to deal with that and actually having to put it in plans for 2017. It’s going to take a sharp pencil this year when we get to the budgeting phase.”

Both elements of the producer survey, the Index of Current Conditions and the Index of Future Expectations trended lower. Widmar is watching to see if this drop mirrors a lower trend last spring. 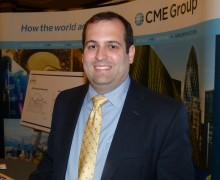 “All last spring we slid,” he said. “We slid from 107 points in December down to 85 points last spring. That again was another scenario of a tough budget situation, uncomfortable conversations with ag lenders for some producers, and I think that led to some sliding last year. I think we’re starting to see that again last year. There’s a lot of optimism still out there about the future, more than we saw in all of 2016, but it’s still a tough environment out there and our survey results capture that.”

Two-thirds of the respondents said they expect soybeans to be more profitable than corn this year. Fifty-two percent of producers think it’s going to be a bad economic year in ag in 2017, and 86 percent think ag exports the next five years will be stable to improved. Widmar said that’s a level of optimism not many ag economists are likely to share.

Producers were more optimistic about farmland values compared to November, the last time farmland was included in the survey. Get those measures in the full barometer here.