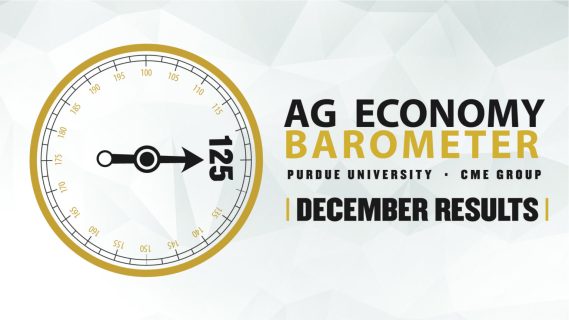 December marked the second month in a row that farmers reported a stronger financial performance for their farms. The Farm Financial Performance Index rose 7 points to 113 in December which is the index’s highest reading since May and is 21% higher than readings obtained just before the pandemic’s onset.

“Excellent crop yields this fall, combined with strong crop prices, provided many producers with their most positive cash flow in recent years. That combination helps explain the year-end rise in the financial index as well as the barometer overall,” said James Mintert, the barometer’s principal investigator and director of Purdue University’s Center for Commercial Agriculture.

Even as supply chain issues continue to hamper producers’ capital investment plans, the Farm Capital Investment Index rose in December, up 10 points to a reading of 49. This marks the most positive value for the investment index since August, but remains 47% lower than in December. The investment index’s improvement was primarily the result of fewer producers in December saying they planned to reduce their machinery purchases in the upcoming year, responding instead that they plan to hold their investments steady with the prior year. This month, 45% of survey participants said that low farm machinery inventory levels impacted their farm machinery purchase plans.

Farmers expressed concern about rising production costs and the availability of production inputs. When asked what their biggest concerns are for their farming operation in the upcoming year, 47% of respondents selected higher input cost from a list that included lower crop and/or livestock prices, environmental policy, farm policy, climate policy and COVID’s impact. Over half (57%) of producers said they expect farm input prices in the upcoming year to rise by more than 20% compared with a year earlier, and nearly four out of 10 respondents said they expect input prices to rise by more than 30%.

This month’s survey also asked crop producers if they have had any difficulty purchasing crop inputs from their suppliers for the 2022 crop season. Nearly four out of 10 (39%) of respondents said they’ve experienced some difficulties. In a follow-up question, producers who indicated that they were experiencing difficulties in making purchases were asked which crop inputs they’ve had trouble purchasing. Responses were varied, which could be an indication of problems across the supply chain and included difficulties in purchasing fertilizer (31%), herbicides (28%), farm machinery parts (24%) and insecticides (17%).

Both the short-term and long-term farmland value indices declined slightly in December. The Short-Term Farmland Value Expectation Index declined 4 points to 153, while the long-term index declined 6 points to 152. Although both indices declined in December, they remain near their all-time highs. Producers who indicated they expect farmland values to rise over the next five years were asked a follow-up question asking them about the main reason they expect farmland values to rise. Producers indicated nonfarm investor demand (61%), low interest rates (13%), and strong farm cash flows (11%) were their primary reasons for expecting values to rise.

Read the full Ag Economy Barometer report. The site also offers additional resources – such as past reports, charts and survey methodology – and a form to sign up for monthly barometer email updates and webinars.

Each month, the Purdue Center for Commercial Agriculture provides a short video analysis of the barometer results. For even more information, check out the Purdue Commercial AgCast podcast. It includes a detailed breakdown of each month’s barometer, in addition to a discussion of recent agricultural news that affects farmers.