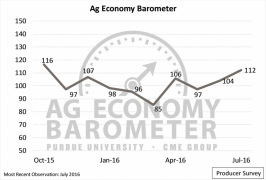 Agricultural producers are feeling more optimistic about the health of the agricultural economy despite declines in key commodity markets in June and early July, according to the latest survey results from the Purdue/CME Group Ag Economy Barometer. The July Producer Sentiment Index jumped to 112, an eight-point increase over June’s 104 reading. The index is based on a monthly survey of 400 U.S. agricultural producers. It includes measures of sentiment surrounding both current conditions and future expectations. The increase comes on the heels of falling crop prices and was primarily driven by optimism about the future, said Jim Mintert, the barometer’s principal investigator and director of Purdue’s Center for Commercial Agriculture.

“The improvement in producer sentiment occurred despite the fact that grain and oilseed prices declined sharply in late June and early July,” said Mintert, who also is a professor of agricultural economics. The Index of Future Expectations increased to 121 in July, which is well above June’s 107 and is the highest reading of the index since data collection began in the fall of 2015. But while producers were optimistic about future conditions in the agricultural sector, their feelings about current conditions declined. The July Index of Current Conditions came in at 93, a five-point drop since June. “Although the uptick in crop prices this spring was short-lived and prices retreated in late June and July, it appears that the price rally boosted producers’ expectations about future economic conditions,” Mintert said. “In other words, the spring rally didn’t substantially improve producers’ perspectives regarding near-term economic conditions, but it did affect how they viewed the future.”

On the July survey, producers were asked about their expectations for commodity prices. Twenty-three percent of respondents said they expected higher corn prices a year from now, 20 percent said soybean prices would be higher, and 25 percent said they thought wheat prices would be higher. In addition to their optimism about grain prices, 23 percent of producers also indicated they expect higher farmland values in a year. That’s the highest percentage recorded since data collection began. Furthermore, the 25 percent expecting lower farmland values in a year is the lowest percentage recorded in the same timeframe. 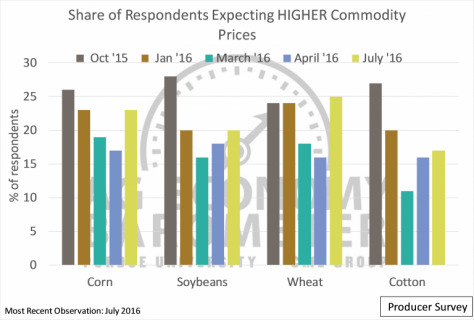 On Thursday, August 4, Purdue agricultural economists Mike Boehlje, David Widmar, and Michael Langemeier will present a quarterly webinar focused on the Ag Economy Barometer findings, including information from the thought leaders’ survey. The free webinar will be at 1:30 pm EDT. Register at https://purdue.edu/agbarometer.