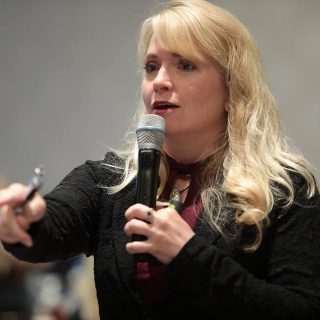 One of the nation’s largest and most prominent dairy operations found themselves the victims of an animal rights attack last week. The undercover video made national headlines and has resulted in some milk brands being pulled from store shelves. Farmer reaction to the Fair Oaks story has ranged from outrage to depression. Many have lashed out at the animal activist movement, but noted  author, speaker, and Boone County dairy farmer Michele Payn says striking back is not the right approach. “It is not the time to poke fun at animal rights activists,” she states. “It is not time to point out how unethically they produce these videos, which is an accurate statement, but rather a time for those in the ag community to show how they have compassion.”

Payn, a recognized expert in consumer attitudes about food, says incidents like this make many farmers reluctant to discuss their operation with consumers or to open their door to the public, “Certainly the threat of activists coming on to your farm is terrifying for any farmer and is one of the biggest reasons many are reluctant to engage with the public. But, that means the bullies win. Are farmers really okay with the bullies from the activists groups winning, because I am not.”  She adds these groups cannot be allowed to control the conversation and define who we are as farmers, “We have to be in control of our own image, and we have to control the conversation and be willing to take the risk.”

Several grocery chains in the Chicago area have pulled FairLife brand milk which is made with mostly Fair Oaks milk. Payn says this is something farmers and consumers should unite to oppose. “There is no question that the food bullies are winning cases when it comes to animal rights because they are pressuring retailers to make decisions they want them to make,” she states. “As a consumer, I think it is time to stand up and say I am not okay with this.” Payn says consumers want safe food and want ethical standards, but they also want food they can afford, “I am not okay with having to pay $8 for a gallon of milk….I am not okay with being bullied. The reality is brands are being bullied, consumers are being bullied, and farmers are being bullied.”  Payn’s research on food bullying will be contained in her book that is scheduled for publication in November.

Payn urges the ag industry, both large and small operations, to unite and to lift each other up in these times of economic hardship and uncertainty.  She also stresses that consumers should not paint all operations with the broad brush of animal abuse from one isolated incident.