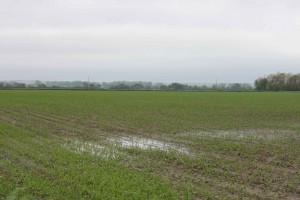 While some farmers in the U.S. are hoping for rain, DTN reports those in the eastern and northern Corn Belt want the rain to end for now – as rain-soaked soils have delayed planting for farmers in Ohio, Indiana, Minnesota, Michigan, North Dakota and Wisconsin. Plant pathologists say young corn and soybean seedlings that sit in wet soils can become easy victims for molds and fungi. Flooded fields can also harm corn plants, and heavy rains can leave a thick crust on fields that can distort or suffocate seedlings. DTN Meteorologist Bryce Anderson predicts near to above normal precipitation in the Midwest through June.

Ohio State University plant pathologist Anne Dorrance says scouting is a must for growers who planted corn or soybeans despite wet fields. Dorrance suggests those farmers dig up a few plans to make sure the mesocotyl is healthy – as that will help the plant get established. If molds or fungi have gotten to the plant – she says that white section of the plant will be brown and rotting – and farmers may have to replant.