A Farmer’s View of the Farm Bill 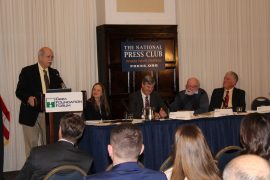 The President’s budget plan that was released this week calls for a 30% cut in funding for crop insurance. While this plan stands little chance of being approved, farmers are apprehensive about what is going to happen to crop insurance when the new Farm Bill gets written. The Farm Foundation held a forum on the new Farm Bill in Washington this week, and ag economists and academics were on the program. Don Villwock, from Knox County, was the only farmer on the program and stressed most of those writing the Farm Bill have never had to live with it.

Villwock, who has had to live with 9 different Farm Bills, said crop insurance is an example of how clueless Washington is. He told the forum it is not just a safety net for farmers, “It is a safety net for bankers, machinery dealers, fertilizer dealers, the input suppliers, the crop production folks, and even the landlords.” Villwock said there are those who want to cut the harvest price option on crop insurance, “But you have to realize that 80% of farmers use the harvest price option. It is really reflective of how the market operates.” He said in, 2012 during the drought, if farmers had not had the harvest option, they would have had no crop and no way to take advantage of the higher market price at harvest. 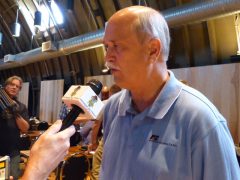 He noted that those who want to limit payments to only farm operators don’t understand the consequences of such an action, “If you say that off farm members who have ownership in a farm are not allowed to get farm program payments, it will force those landlords to move from share agreements to cash rent agreements. That would be devastating for young farmers.” Villwock said weakening the crop insurance program will hasten farm consolidation by forcing many farming operations out of business.

Villwock added that farmers in 2018 will not have the option to not take crop insurance, but lenders will require participation. He said lenders are struggling to find ways to cash flow many farming operations. The former president of Indiana Farm Bureau said a new Farm Bill must include a food assistance program and that agriculture must support such a program, “In my local school corporation in Knox County, 50% of the students are on food assistance, and we are not an especially poor county. To think that anyone is this country, adult or child, goes to bed hungry is just unacceptable. We in agriculture cannot let that happen.” Villwock is confident there is enough support in Congress to pass a Farm Bill, but worries that politics and Washington gridlock may present a formidable challenge.

The forum was held at the National Press Club and also featured Joe Outlaw, Co-Director of the Agricultural and Food Policy Center and Professor of Agricultural Economics at Texas A&M University; Patrick Westhoff, Director of the Food and Agricultural Policy Research Institute at the University of Missouri; and Craig Jagger, formerly Chief Economist of the House Agriculture Committee and Principal Analyst, Congressional Budget Office.

“Multiple titles of a farm bill are heavily driven by economics—everything from commodity prices and farm income to trade numbers, labor costs and the economic health of rural America,” says Megan Provost, Farm Foundation Vice President of Policy and Programs. “The depth of our panel’s past work on Farm Bills, combined with their diverse experiences working in the production agriculture, legislative and academic arenas, yielded a rich discussion of the challenges and opportunities ahead as Congress writes the next Farm Bill.”