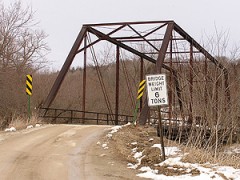 Governor Mike Pence unveiled his 21st Century Crossroads proposal this week, a plan that will make $1 billion in new road funding available over the next four years. While Indiana farmers are supportive of new funding for the state’s infrastructure, they are concerned about the Pence priorities.   “Transportation is vital to corn and soybean farmers in Indiana. Moving the crops, livestock, biofuels, and food products from the farm to the consumer requires significant travel on local and state roads and bridges. While we applaud Governor Pence’s decision to invest in the infrastructure of our state, we encourage him to emphasize the importance of increased investment in local roads and bridges,” said ICGA President Herb Ringel.

Transportation infrastructure is a priority for the state’s corn and soybean organizations. Indiana corn and soybean farmers are investing checkoff dollars to help rural communities more accurately diagnose the structural capacity and weight limitations of their bridges. ISA President David Lowe added, “Nearly a quarter of the bridges in our state are in need of repair, and thousands of miles of rural roads are not being maintained. Indiana agriculture accounts for $44 billion of the state economy, and we encourage Governor Pence and the members of the General Assembly to make rural transportation funding a priority in 2016 and in subsequent years.”

In making the announcement, Pence said his plan would put the Indiana Department of Transportation (INDOT) on a path to resurface 16,000 miles of state highways and repair more than 5,200 bridges over the next 15 years. “These additional funds will help INDOT make future maintenance and repairs as the interstate system comes of age and will help ensure that our roads can support the economic and employment growth our state has seen over the last few years.” Farmers want to make sure that funding for local roads and bridges is not lost sight of in the effort to upgrade the state’s interstate system.

Is Planting Soybeans in 15-Inch Rows With Split-Row Planters Profitable?

Moth Trap Captures “Springing” Up, Currently Other “Worms” Being Found

Planting Window Opening Up Next Week